I had lunch from a food truck which was new to me called Chicken Waffle Grill. They were parked outside a hotel near the airport where I was attending a convention. My first time trying chicken and waffles was also from an Orlando food truck called Melissa's Chicken and Waffles, which I don't think is around anymore. I'm glad there's another chicken & waffle food truck around to fill the void. 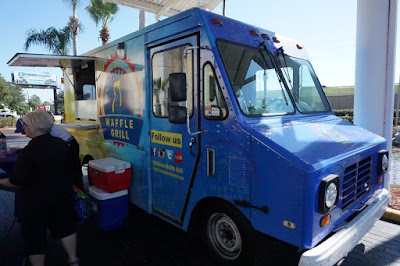 I had the Mac & Cheese Waffle. The waffle was topped with fried chicken, macaroni and cheese, lettuce, potato chips, and a slightly spicy sauce. Fries and syrup were served on the side. As unhealthy as this might sound, overall it was actually really tasty and all the flavors worked together well. 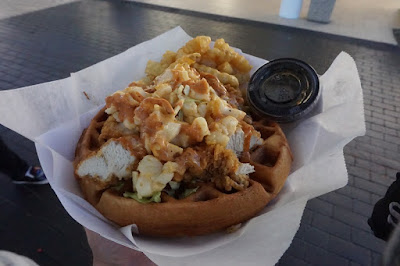 My big complaint was with the plastic silverware that the truck supplied. It was really flimsy and I went through three plastic forks snapping in half as I was trying to eat my lunch. Otherwise, I enjoyed my waffle!
Posted by Watch Me Eat at 12:22 PM No comments:

After spending some time in El Paso for a convention, I rented a car and went on a whirlwind tour of New Mexico. Here's some of the food from that whirlwind.

The town of Mesilla was very pretty with lots of adobe architecture. While there, I had lunch at a sprawling restaurant called La Posta de Mesilla. They've been around since 1939 so they must be doing something right. 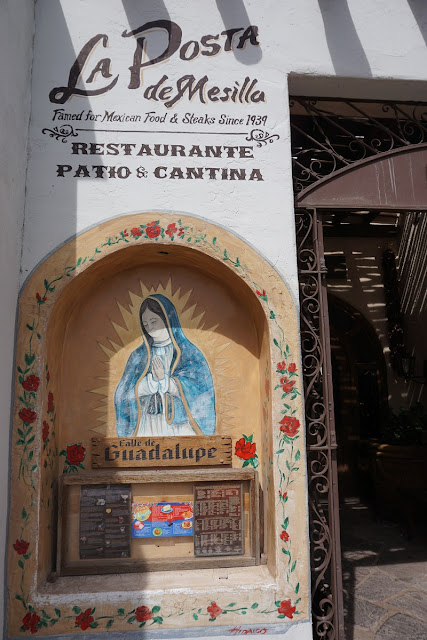 I had a combination plate which included a tamale, taco, enchilada, chili con carne, rice, and beans. It was a huge amount of food for a reasonable price. 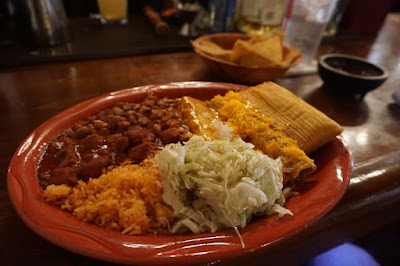 Moving on to Albuquerque, I had breakfast at Church Street Cafe in Albuquerque Old Town. My decision on where to eat was made easy because this was the only restaurant I found open for breakfast in Old Town. 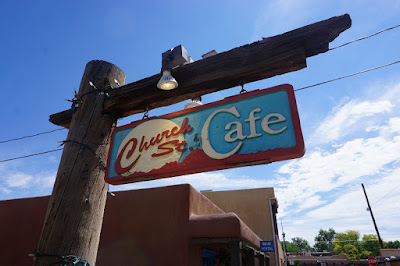 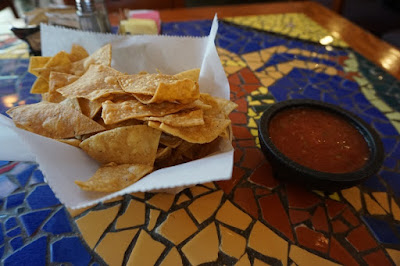 I had Huevos Rancheros topped with half green chili and half red chili sauce. Homefries, beans, and tortillas were served alongside the eggs. New Mexico's green chili is delicious. 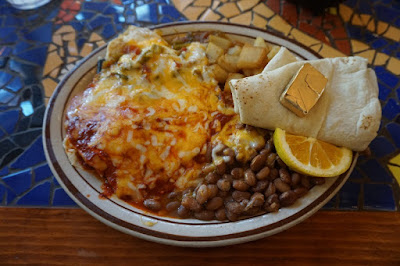 This restaurant was recommended to me by somebody who grew up in Albuquerque. Located right across the street from the University of New Mexico, Frontier had somewhat of the same feel of the indoor portion of Atlanta's Varsity with very different food. 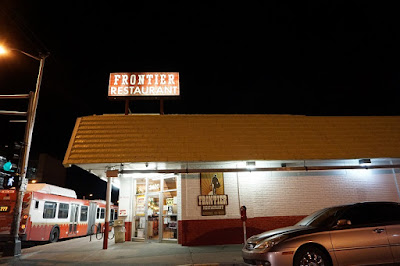 I had the Mexican Combo, which came with an enchilada, taco, rice, beans and flour tortilla. I also ordered a cup of green chili stew, because green chili must be eaten everywhere in New Mexico. The combo was good, but not the best Mexican food I've ever had. It didn't seem nearly as authentic as my meal in Mesilla. The green chili stew was delicious though. 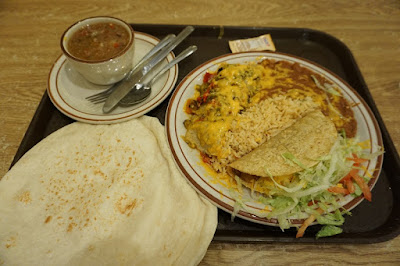 A second breakfast the next morning in Albuquerque. This time at a restaurant called the Standard Diner. 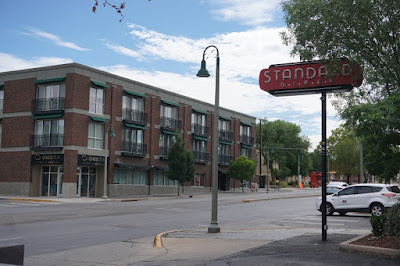 I had the Rail Runner. This was named after the commuter rail connecting various cities in New Mexico (with a way cooler paint job and better sound effects than Orlando's SunRail). It consisted of scrambled eggs and chorizo over a cheddar biscuit, topped with New Mexico green chile, pimiento queso, and white cheddar. Black beans and hash browns were served on the side. This was pretty delicious! 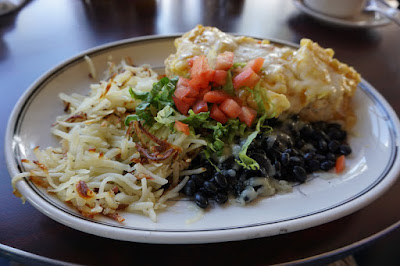 Moving on to Santa Fe, I had dinner at a restaurant in downtown called Los Magueyes. They were located on a side street closed to traffic called Burro Alley and had seating in the street. 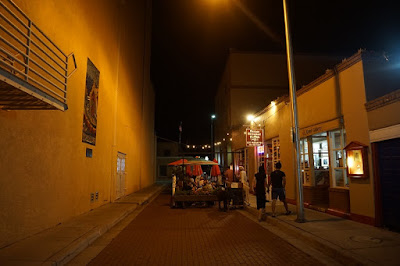 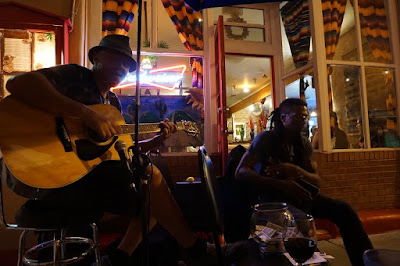 I had the Nuevo Guadalajara Special. It came with flautas filled with chicken served over a piece of steak, a tamale, rice, beans, and garnishes. For some reason I was expecting a chicken flauta and a steak flauta rather than chicken flautas served over steak. It was unexpected and resulted in a lot more food. Everything was good (although the steak was a little tough). 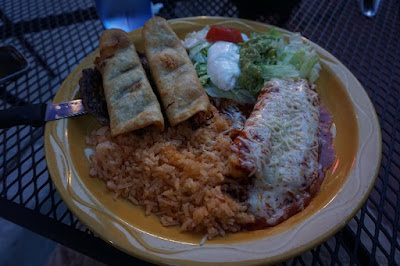 Roswell and aliens are such a big part of American pop culture that I couldn't not stop at the UFO museum. I had lunch on the next block at El Toro Bravo. How could I not want to eat at a restaurant with mariachi aliens painted all over the outside of the building? 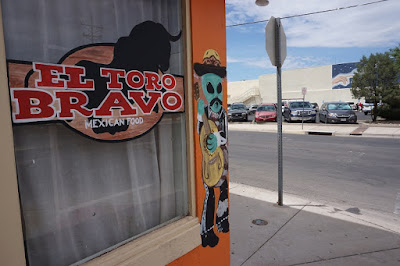 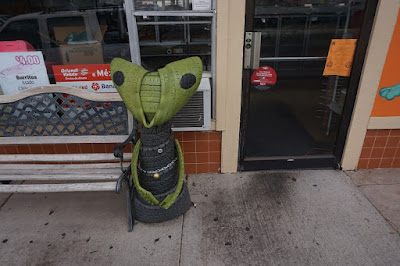 They had a lunch buffet going on. How about we not talk about the food on the buffet and focus on the cute tire tread alien above? After the Mexican food deliciousness that I had eaten all week, this was pretty disappointing. I guess the extraterrestrials haven't quite figured out how to have good Mexican food on a buffet yet... 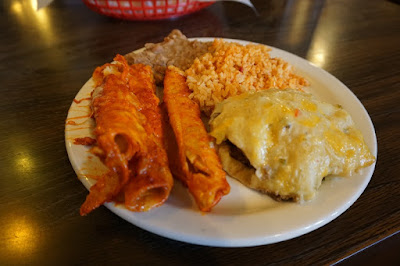 Let's start out 2017 with some posts about the foods from some of my travels in 2016 which were never published. I spent just about a week in El Paso, TX. This was my second trip to Texas in 2016, but this time I was in a totally different part of the state. I guess because Texas is huge, I got a totally different vibe of of the state on this trip compared to last. Both good, just different. The food was different as well. Much more of a Mexican influence, although tacos almost seemed less prevalent. Read on...

I was expecting good Mexican food in El Paso. L&J Cafe was my first experience with Mexican food in the city. They were located in a historic building with a view of a cemetery. L&J seemed to be an happening place with a wait when I arrived, plus people all around town were recommending it as a good Mexican restaurant.. 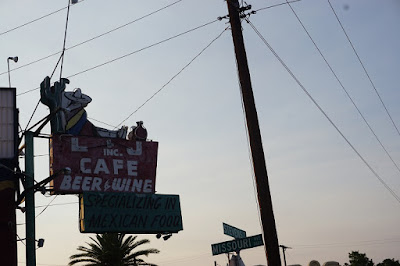 I tried the Machaca Plate. This was new to me and consisted of shredded beef mixed with scrambled egg, tomatoes, onions, and jalapenos. Refried beans, rice, and tortillas were served on the side. Pretty tasty. Trying something new at a Mexican restaurant was a nice break from the standard enchiladas, tacos, and tortillas that pretty much everyone serves. 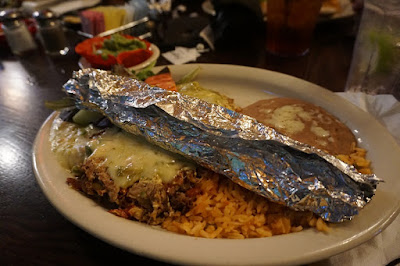 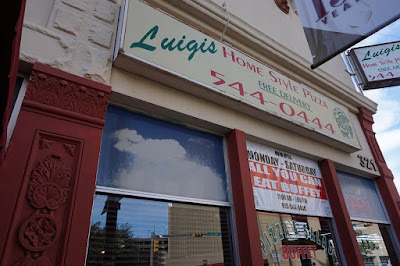 I found out it's hard to find restaurants that are open for business on weekends in downtown El Paso. Luigis was one of the few places serving food when I went looking on a Saturday afternoon. They had a pizza buffet going on, but it looked really sad and unappetizing. A fresh pizza was ordered instead. We had it topped with pepperoni, onions, black olives, and green chilis. This was my first tasting of green chili in the area. They made a very nice topping... 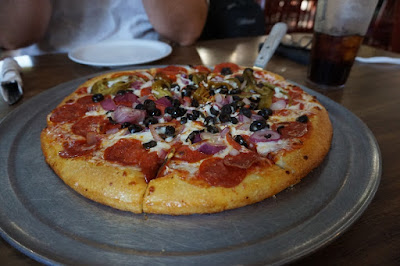 This was another restaurant in downtown El Paso which was recommended. Burgers aren't normally my first choice on a menu, but the Toreado Burger caught my attention mostly because I didn't know what a toreado was. Turned out a toreado is a roasted jalepeno. The burger was topped with the toreados, provolone cheese, sliced avocado, mushrooms, and cilantro. I picked something called Sidewinders as my side which I actually enjoyed more than the burger. These were a combination of a wedge fry and a curly fry, with some really tasty seasonings. 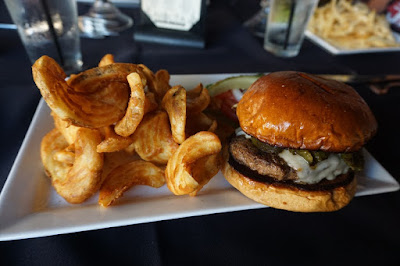 I had these from a food truck at the El Paso Convention Center. Pretty standard Mexican style tacos with meat topped with cabbage, cheese, and lime. 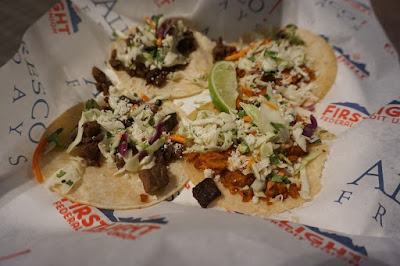 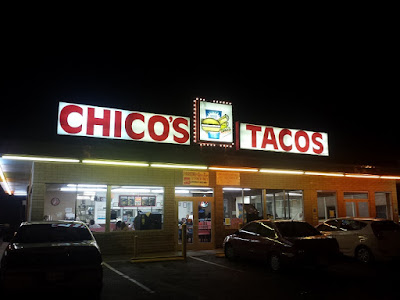 Chico's Tacos was a local chain with several locations, most of them open late at night. I visited the original Chico's Tacos location on Alameda Avenue which has been around since 1953. This place was interesting. The tacos which Chico's serves weren't like tacos I know. These were rolled up tortillas filled with ground beef, then drenched in a pool of red sauce and covered in cheese. The tacos were tasty junk food, but I don't know if I'd rush out to get tacos like this again. 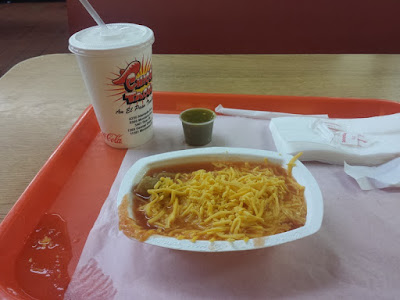 El Paso and Juarez, Mexico are basically one city with a pesky international border. My hotel was located a few blocks from the border and I could see more of Mexico than the United States from the hotel's window. Because of this, I had to venture into Juarez while I was in El Paso. After the easiest border crossing/customs I've ever been through, I spent a few hours in the city. I didn't have any food in Juarez, but something food related worth noting was The Kentucky Bar. The Kentucky has been around since 1920 and their claim to fame is having invented the Margarita. 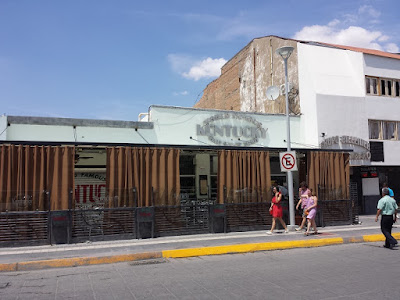