I had breakfast at a restaurant called Flakowitz Bagel Inn on my last visit to Boca Raton. This place has apparently been around for quite a long time and is very popular. It is a New York style bagel place with a really large dining area. Most of these type of places in Boca seem to be always filled with senior citizens, but this one was a bit different. Most of the people in here were young to middle aged, with most everyone in my hearing range having very obnoxious New Jersey accents. 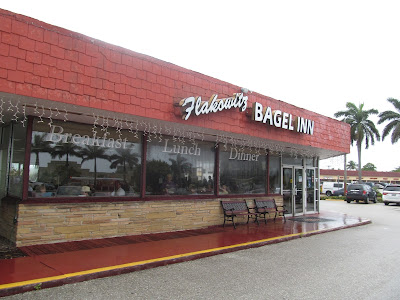 A basket of bagels was delivered to the table with everyone's food. I had an everything bagel that was very good. 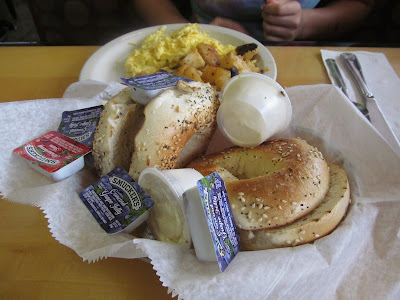 Beside the bagel, I ordered their Two Egg Breakfast. This came with scrambled eggs, homefries, and two slices of bacon. It was a very basic breakfast, but it did the job! 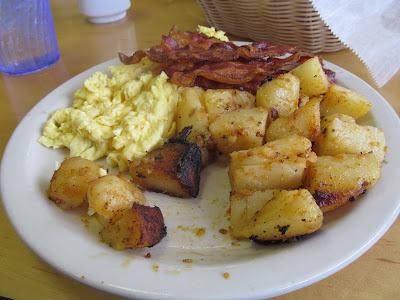 I was in Sarasota for the day and decided to get some lunch at a restaurant called O'Leary's Tiki Bar. The restaurant was located in Island Park and had a very nice view of the bay. 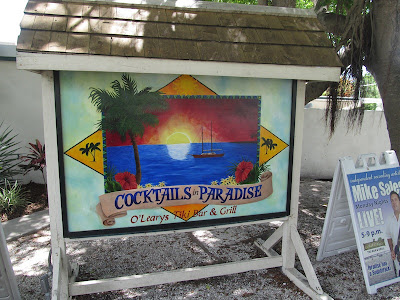 I had the Blackened Fish Bun.The sandwich had to large filets of fish on a roll along with lettuce and tomato. Curly fries were served on the side. The fish sandwich was good, too big for the bun, but can't really complain about that. I liked the fries. They were the type that have enough flavor alone where they don't need to be dipped into anything. The curly shape was just an extra plus. 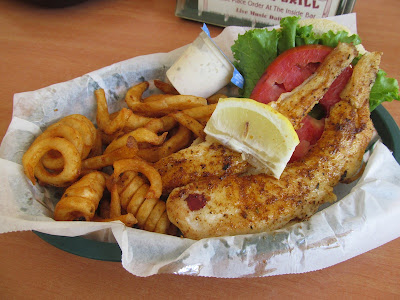 I'd come here again, but I discovered a nifty downtown section of Sarasota a few blocks away that I had never came across before as I was leaving with lots of restaurants to try. Think I'll be exploring the food in this section of town next time I'm in Sarasota...

There's a new cupcake truck in town! I was sent a coupon to try the Stay Calm Cupcake Truck for their grand opening. I found them at Rebounderz in Longwood for a very rainy Taste Bud Tuesdays. 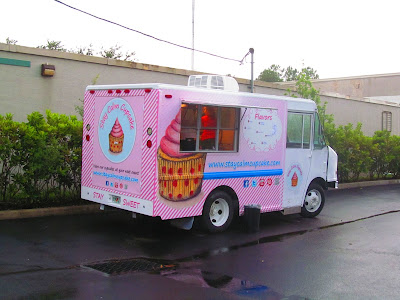 We tried the strawberry lemon cupcake and the chocolate peanut butter cupcake. 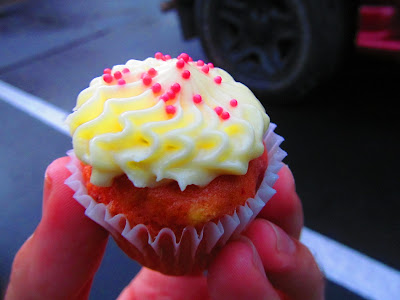 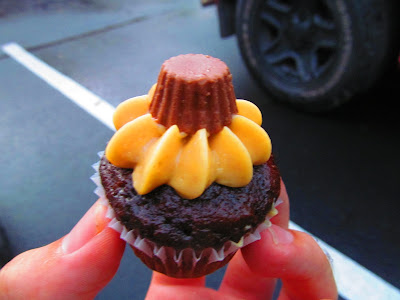 I was in West Palm Beach and had dinner at a restaurant called Rocco's Tacos. I didn't realize this was a chain before eating there, but they have several locations throughout Florida with one opening soon on Sand Lake Road in Orlando. The inside of this Mexican restaurant looked pretty nifty with all sorts of cool metal lights and old brick walls. It was also very loud and very cramped, with hardly any room between tables. 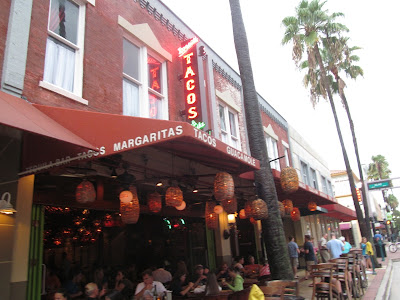 We started with chips and salsa. It sort of rubs me the wrong way when Mexican restaurants charge extra for chips and salsa when so many other restaurants include them in the price. Rocco's had higher prices than most other Mexican restaurants and they still charged extra for the chips. That being said, the chips were pretty tasty. They were topped with some sort of seasoning that made them really flavorful, even without the salsa. Dipped in the salsa, they were only made better. 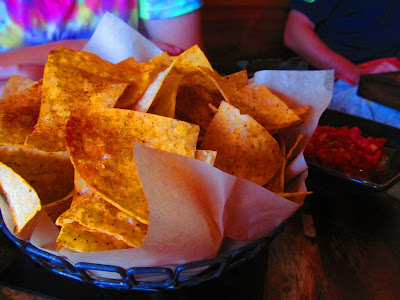 I had the Enchiladas Rojos for my dinner. This consisted of two corn tortillas filled with pulled pork and topped with cheese and a guajillo chile sauce. Refried beans and rice were served on the side. I found the enchiladas to be very average. The pork was a little dry and tasted very bland. The sauce seemed to provide all the flavor in the enchiladas. They tasted okay, but weren't anything worth going out of my way to return for. At $13, they were also kind of pricey for very typical enchiladas. 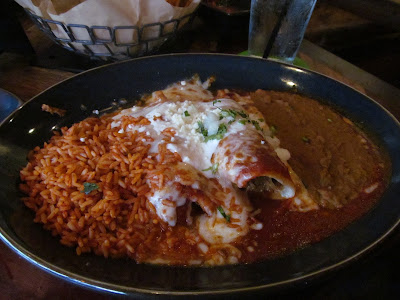 Rocco's Tacos seemed to be an upscale Mexican restaurant that served basically the same food that you could get at any other dumpy Mexican restaurant. The only big differences seemed to be higher prices and fancy lighting fixtures. Based on the amount of people in Rocco's though, it seems like people really like them. I hope it isn't just because of those lights...

On July 4th, I watched the fireworks at Lake Eola park in Orlando. Lots of food vendors were set up, most of which I did not partake. As I was leaving though, I did start to get hungry and noticed skewers of Indonesian chicken satay being grilled. 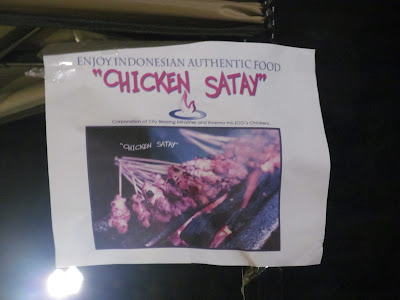 The grilled meat smelled really good and the skewers were very affordable compared to most of the other foods being sold in the park. 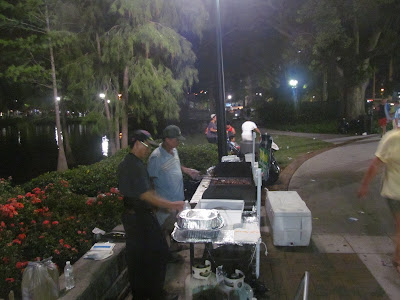 I bought my chicken satay, which was immediately drenched in peanut sauce, and I proceeded to eat as I wandered around Downtown Orlando. These tasty chunks of chicken made me think about how Orlando needs more street food that is between a full-fledged food truck and the hot dog carts that show up late at night. We need more skewer carts. We need some halal carts. We need all those fun little carts that show up in other cities like New York and Washington, but have yet to come to Orlando. The ones that fit on a sidewalk corner and provide a nice tasty snack for cheaper than any full restaurant or food truck. Chicken Satay should be around in Orlando all the time, not just on holidays in the park... 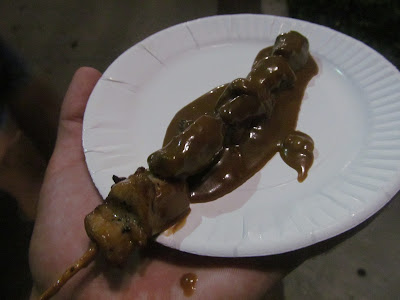 I had dinner at a new Italian restaurant on International Drive called Big Italy. While many of the neighboring restaurants were serving Brazilian pizza (which I've yet to try), this place was going for the traditional Italian stuff. 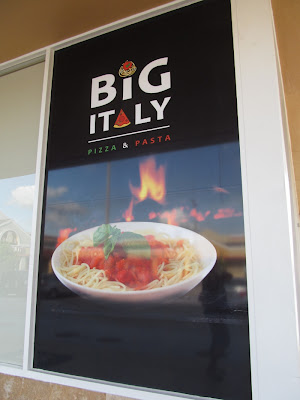 They advertised over 100 types of pizza. Initially, I was a little scared and was expecting a place like CiCi's with a claim like that, but it turned out that they had a nice menu of all sorts of interesting sounding pizzas. We decided to try a pizza called the Big Italy Trio. Meant to look like the Italian flag, the pie was split into three sections. Green was topped with arugula. The white section had four cheeses. Red was made from slices of prosciutto topping the pie. 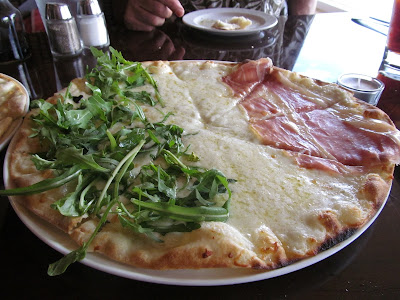 I thought this pizza was good. The crust was thin and crispy (although not a NY style type of thin, more cracker-like). The toppings were tasty, beside the boring four cheese section. I think I would give Big Italy another try for some of their other 99 types of pizzas!

Da Kine Diego's Insane Burritos is a fun little burrito place in Satellite Beach. The restaurant was listed as the #1 place for cheap eats on Urbanspoon in the Melbourne area, so I figured it was worth a try! 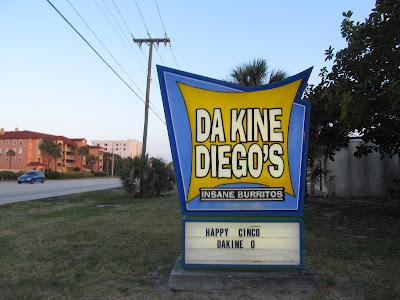 Da Kine Diego's had a really cool eating area with giant palm umbrellas over their outdoor seating. It also looked like they had a screen set up behind the restaurants to potentially show movies. 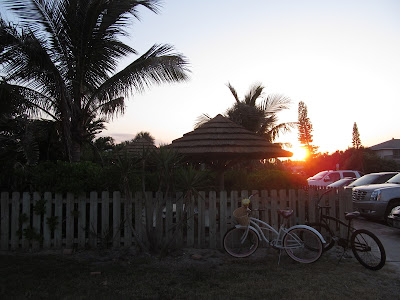 The line winding out the door when I arrived was a good sign that this place was worth a visit. 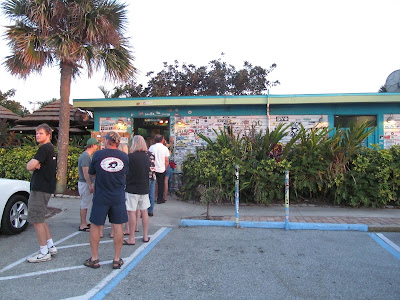 I had one of the Insane Burritos filled with chicken, beans, rice, lettuce, tomato, cheese, and salsa. The burrito was quite large, equivalent to what the chains like Chipotle give if they're generous. It was also served with a nice little instructional card about how to properly eat the burrito for the uninformed. 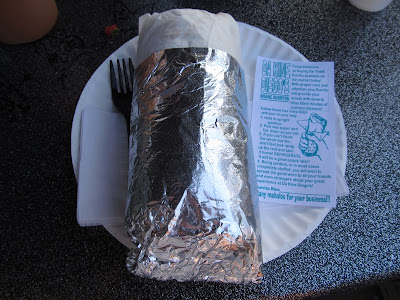 The burrito was good, especially with the addition of the hot sauces that were kept up front by the kitchen. My only complaint was with the cheese, which had somewhat of a slight metallic taste. I've been told this is the taste of the anti-caking agents in pre-shredded cheeses. The cheese at Moe's has the same flavor, and here it took a few points away from an otherwise excellent burrito. The cheese didn't detract enough from keeping me from returning either, because this place was pretty nifty otherwise! 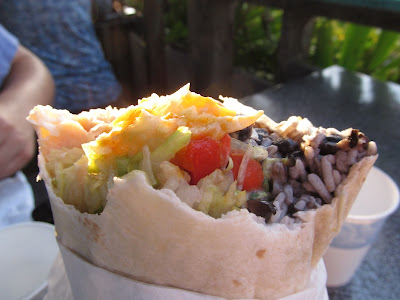 The Orlando Farmers Market that happens every Sunday at Lake Eola Park is one of my favorites in Central Florida. On my most recent food excursion to the farmers market, I had lunch from a booth serving Jamaican food called Mobay Bakery. 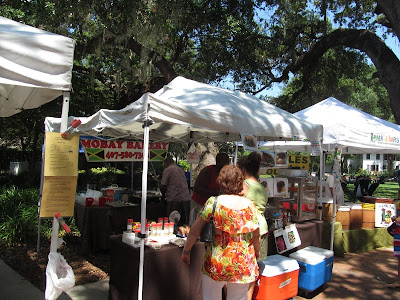 I tried their curry chicken. The chicken was normally served with rice, but they were out so they gave a beef patty instead. The curry chicken tasted good, although the chopped up bones in the chicken pieces did start getting annoying after a while. The beef patty was good (and better than rice in my opinion)! 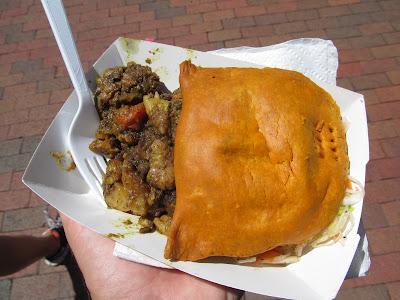 While visiting South Beach on a rainy evening, dinner was had at a Japanese fast food restaurant called Hiro's Sushi Express. I started my meal with a cup of miso soup served in a styrofoam cup. 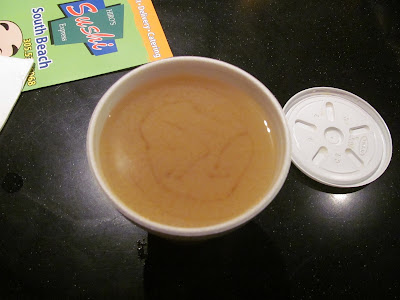 Next up was a shrimp teriyaki box. This bento contained shrimp cooked with mushrooms, rice, vegetables, and an orange slice. The shrimp were tasty but the rest of the box was somewhat boring. The vegetables were very plain and the rice was standard brown rice. 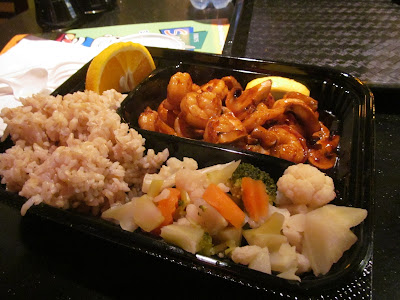 I've enjoyed better Japanese fast food elsewhere in Miami at Iron Sushi, but Hiro's wasn't that bad. They gave a good sized portion of food for less than the price of a milkshake up the street at Shake Shack...