I had lunch at a Chinese take out restaurant called Run & Run in a shopping center off Palm Parkway in Lake Buena Vista. Run & Run was located in a strip mall that definitely catered to tourists filled with gift shops and overpriced restaurants. Because of this, I was a little apprehensive to see the prices here, but the really weren't bad. Run & Run was equivalent to most other Chinese take outs not located on the edge of Walt Disney World. 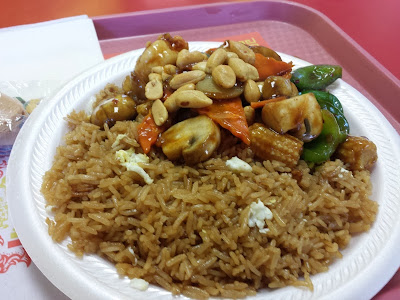 I ordered the Kung Pao Shrimp lunch special. This consisted of the main dish, fried rice, and a canned soda. The shrimp were good sized in a sauce that was spicier than what many other Chinese restaurants serve in an equivalent dish. This was mixed with mushrooms, green peppers, carrots, baby corn, and peanuts. The shrimp was a little mushroom heavy for my liking, but was otherwise tasty. The fried rice was a bit plain, being basically rice mixed with scrambled egg. Not much else was going on in there. Overall, Run & Run was a pretty standard Chinese take out. Not the best I've had, but not the worst either. I might stop back here at some point if I'm looking for Chinese food near Disney in the future...

I recently had dinner at a fast food Japanese restaurant in Ocoee called Miwa Hibachi & Sushi Express. I ordered the shrimp teriyaki meal, served with fried rice and vegetables. They gave several good sized shrimp, and then asked if I wanted some extra teriyaki chicken from the last person's meal that they cooked. I took Miwa up on their offer and sampled their chicken as well. The meats were tasty, although typical for what is served in hibachi style restaurants like this. The vegetables mostly consisted of cabbage and broccoli. The rice was good as well. 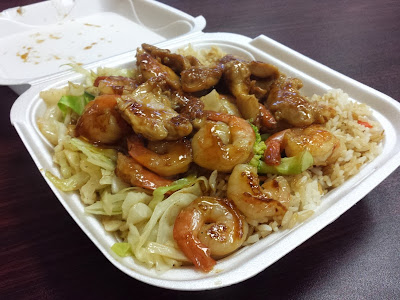 Miwa's portion size was huge. I couldn't finish all the food. It was definitely a good value for the price. I don't get out to Ocoee all too often, but I'd return here again sometime in the future...

I had food from a restaurant from Salem's Gyros & Subs in Lakeland. This fast food restaurant looked like it was a former Miami Subs at some point. Gyros and subs were a big part of the menu, but gizzards and livers seemed to be another big seller here. There were three occupied table in the restaurant while I was inside and all three appeared to be eating fried gizzards. I decided to skip the offal (that I know of) and ordered a gyro combo. 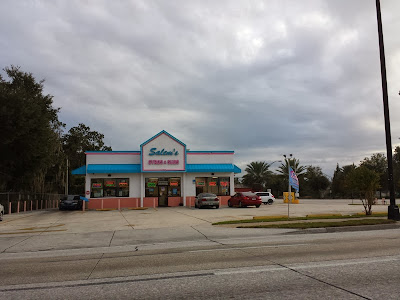 The combo came with a gyro pita, fries, and a drink. It was somewhat pricey for fast food at almost $10. I declined the offer to add gizzards for an additional $2. The fries were definitely fresh. Very hot and nice and crispy. 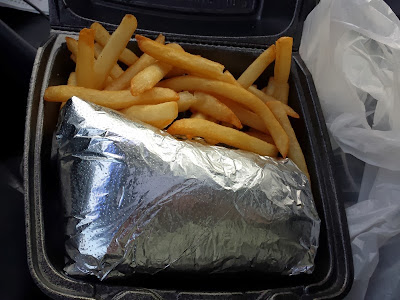 The gyro consisted of sliced lamb, tomatoes, onions, and tzatziki, all wrapped in a pita. There was a whole lot of meat in the sandwich. It had nice flavor and the tzatziki kept the pita nice and moist. 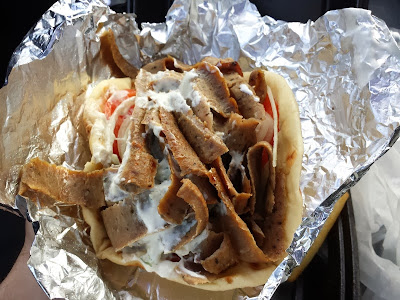 Salem's made a good gyro. It was still a little overpriced, but I'll forgive them. I probably won't return any time in the near future, mostly since I don't live in Lakeland, but I might if I lived closer... 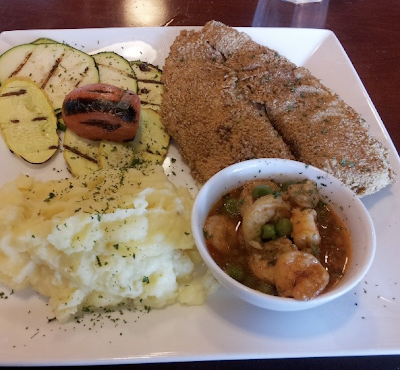 I ordered the Breaded Fish with Shrimp Sauce. The menu described this as fried breaded fish topped with shrimp tomato sauce and peas served with mashed potatoes and the vegetable of the day. When I got my food, the shrimp sauce was served separate from the fish in it's own bowl. It was more like a shrimp soup, with lots of shrimp floating with peas in a tomato based broth. I started by pouring some of this over the fish, but then ended up eating them separately. The huge piece of fish was nice and moist in a tasty breading. Mashed potatoes were good, and the vegetable of the day turned out to be slices of grilled zucchini and yellow squash. Everything I tried at Boteco was tasty and I'd return...

I visited Boston Lobster Feast on International Drive for a birthday. This restaurant is a seafood buffet that is definitely targeted towards tourists. They are way overpriced for buffet food, but that doesn't seem to stop the tourists from pouring in. 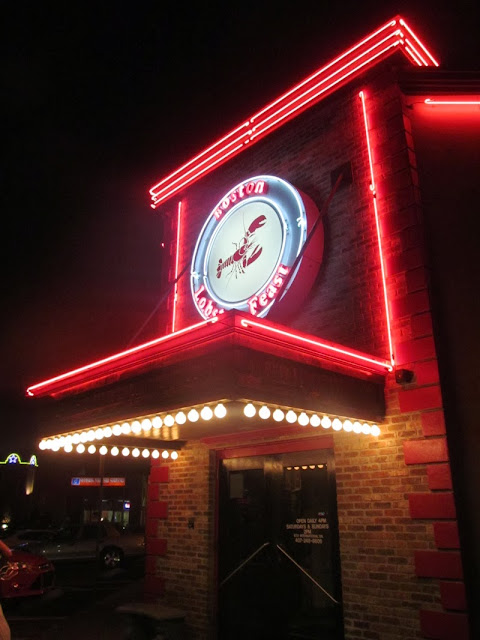 Boston Lobster Feast has three buffet tables set up inside the restaurant. The largest serves most of the hot seafood. Another is housed with much of the chilled food, and the third is filled with desserts. 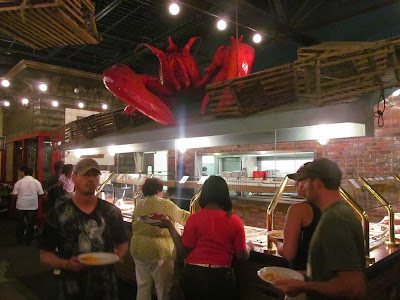 My first trip to the buffet tables resulted in a plate filled with three different types of salmon. This included grilled salmon, smoked salmon, and cured salmon (lox). I also picked up corn on the cob and a biscuit. 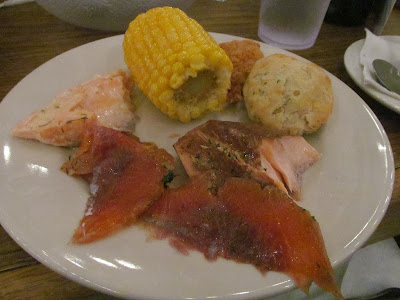 Lobster bisque wasn't self-serve on the buffet, but I said yes when our server offered to bring some to the table. I didn't detect much lobster in here, but the creamy soup was tasty enough. 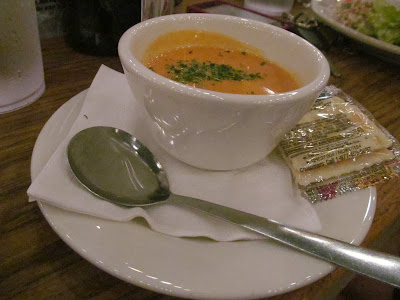 I tired some crab next. I sampled a whole blue crab and some snow crab legs. Somehow I know these crabs weren't as fresh as the crabs from the Maine Avenue Fish Market that I visited in DC earlier this year. 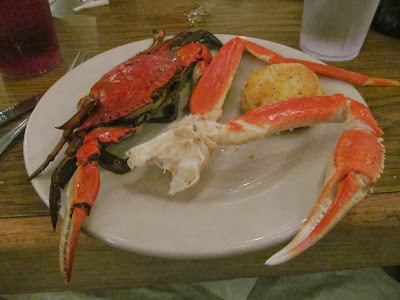 My next plate consisted of some seafood, but more filler items from the buffet. For the seafood, I had a tasty little crawfish, some fried shrimp, and a stuffed crab alongside rice and caesar salad. The crawfish was my favorite thing on this plate. Most everything on this plate was mediocre buffet food. 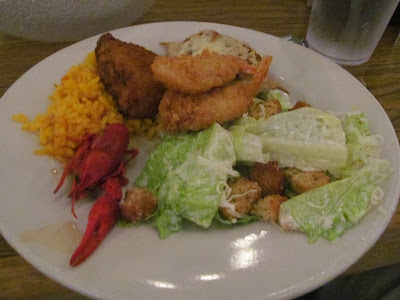 I was going to be done with the gorging after the last plate of food, but I then started thinking that I should probably get lobster from a place called Boston Lobster Feast. The problem is, I'm not the biggest lobster fan out there. It's an okay food, but I just don't understand the hype surrounding the crustaceans. I'd take crab over lobster any day. I got one of the lobsters here and it did not change my opinion. 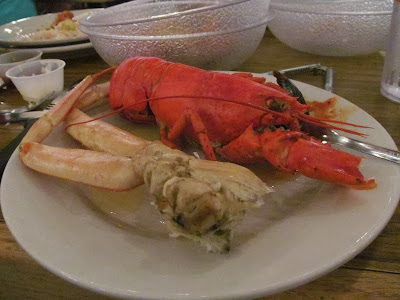 Boston Lobster Feast is mostly mediocre food on a very expensive buffet. I suppose if you want to pig out on as many lobsters as you please, then perhaps this place would be for you. The crab was good, but lots of local Chinese buffets also have crab at a quarter of the price. As for the rest of the seafood and other items, most of it was forgettable. Boston Lobster Feast is okay for what it is, but go in expecting typical buffet food and don't set your hopes too high...

I visited a Lebanese restaurant in Orlando near the airport called Habibi. The counter service restaurant was nicely decorated and the food was made quickly. 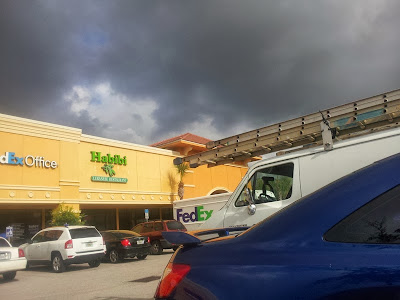 I ordered a chicken shawarma sandwich. This sandwich was filled with lots of grilled chicken, hummus, pickled turnips, and some greens. I also had a side of stuffed grape leaves. I was very excited to see that Habibi had the pickled turnips. These are one of my favorite types of pickled vegetables and I got extra on the side as well as in the sandwich. 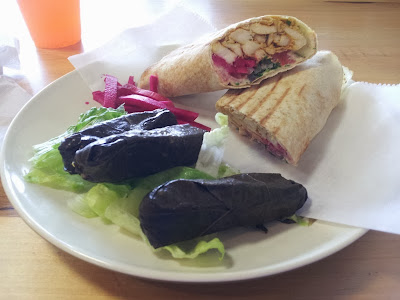 I liked my shawarma. It was tasty. There was enough sauce in the pita so it wasn't dry like these type sandwiches sometimes are. I will probably return to Habibi at some point (or one of their other locations) next time I'm craving some pickled turnips...

I was in Gainesville and had lunch at Leonardo's Pizza. Located within walking distance of UF, this restaurant was filled with mostly college students. I vaguely remember stopping here years ago on a previous visit to Gainesville but don't remember much about the food. It meant this time around, Leonardo's Pizza was new to me all over again! 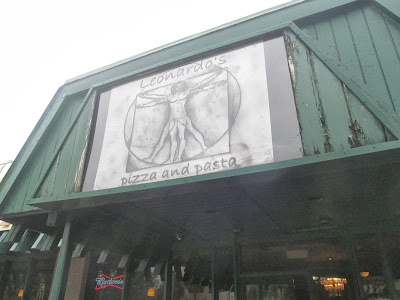 Leonardo's had a very nice selection of pizza by the slice. There were several varieties that sounded good to me, but I decided to stick to two. The slices weren't exactly cheap, ranging from $2.95 to $4.50, so I didn't want to overdo it with my meal. 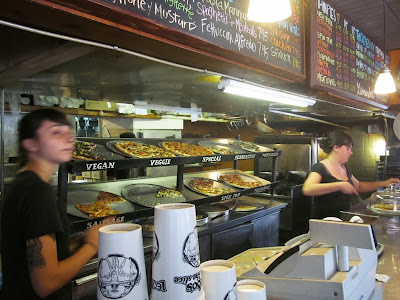 I ordered a slice of the Greek Pizza and the Spinach Tomato Pizza. The Greek was topped with spinach, feta, onions, olives, and pepperochinis. They were generous with the toppings on this pie. There were few spots where the mozzarella cheese underneath could be seen. The spinach tomato slice wasn't as exotic and was topped with exactly what it's name describes. Slices of tomato with spinach on a pizza. Out of the two slices, the Greek was definitely the winner. 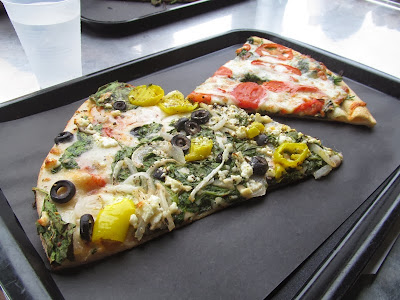 I liked Leonardo's. While the pizza wasn't the all time best that I've ever had, the selection of pies to choose from definitely made this place a winner in my book. I'd go back again!