I visited the Osceola County Fair in Kissimmee, FL. They had all the good stuff that a fair should have such as a huge selection of farm animals, circus acts, and plenty of rather scary rides. But this blog is not about any of that stuff, it's all about the food. While I didn't see any of the famous fair foods like doughnut burgers or deep fried butter, the Osceola County Fair still had a pretty good selection of food served from trailers. The following are random photos of some of the various food vendors at the fair:

I tried the Ribbon Fries from this cart. Fresh potato chips like this are normally pretty tasty, but the potatoes near the bottom of this plate were somewhat soggy.

I also got some roasted corn from this stand (Little Richard's?). How can you go wrong with an ear of corn roasted on a grill, dipped in butter, and then served by grumpy carnies?

Pizzeria Valdiano is a local chain in Central Florida. I've been to their Winter Park and Baldwin Park stores on several occasions and recently gave their Lakeland store a try.

We started with garlic knots. Definitely not the best. They were those mushy, interconnected rolls that had some garlic salt on top. With garlic in the name, I want some actual garlic!

Pizza came next. Valdiano's has one of the best pizza's in Central Florida in my opinion. Definitely within the top 10. While this particular pie wasn't the all time best I've had from a Pizzeria Valdiano, it was still really tasty and better than most of the other pizzas around...

I used to think the food from Disney was pretty awesome compared to most other theme park food. On my latest visit to the Magic Kingdom, I realized that this has changed somewhat. It had been a few years since my last visit to the park and the fast food dining options have definitely shrunk. There were some places serving more interesting food (like the Asian noodle place in Tomorrowland or the Mexican in Adventureland), but they were all closed on the day I visited. Out of the open dining options, restaurants that I remember having having interesting menus (Cosmic Rays) seem to have expanded their burger selection and eliminated many of their other foods.

I decided to have dinner at Pecos Bill Tall Tale Inn and Cafe in Frontierland. Again, mostly burgers but I decided to go with a salad. It wasn't quite what I was expecting... 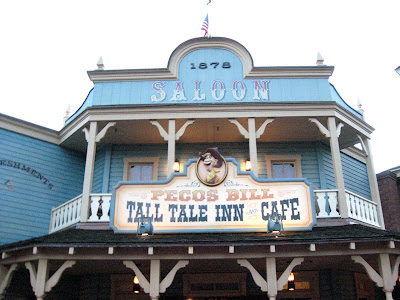 I'm all for salad bars. Salad bars can be good, that is if you know you're getting a salad bar. When I ordered at Taco Salad at Pecos Bill's, I did not realize I was getting a pretty lousy salad bar. After ordering, they handed a fried tortilla bowl filled with some ground beef and a sour cream packet. The lack of vegetables in the salad left me somewhat confused, but then was directed to the restaurant's topping bar. With some lettuce, cheese, banana peppers, sauteed onions, and pickles, I filled my tostada bowl. 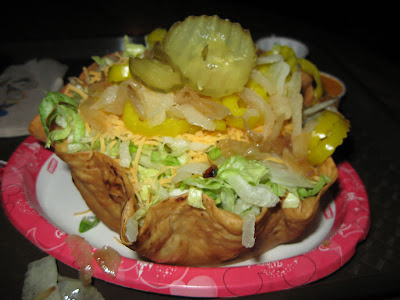 While I did make my salad tasty, it was definitely not what I was expecting. For $8.50, I was thought I'd be getting more than a tiny bit of meat in a tortilla. I really was expecting a ready made salad, with the main salad components already in place. I would not consider a hamburger topping bar to be a good salad bar either.

At least the food at Epcot is still awesome. Lets hope it stays that way...

Bogard's is located on International Drive in Orlando. I came across Bogard's a while back when I was looking for the Amigo's that formerly sat at this location. Several months later, I decided to give Bogard's a try.

Actually, the main reason I wanted to eat here had to do with the very cool water spouts draining off the building's roof into an alligator filled pond below. I didn't know much else about the place, but decided to give it a try. Inside, the restaurant had a biker theme that wasn't obvious from the outside.

The tables all had an interesting table setting consisting of crossed knives and forks...

Really tasty jalapeno corn muffins were served as an appetizer.

I decided to order The Bonafide Shrimp Po'Boy. I was considering a few other menu items, but they were all pretty expensive for what you were getting. Some of the barbecue sounded good, but all the sides were sold separately. From the menu description, it sounded like all you got was meat and bread for twice the price of a complete meal elsewhere. Shrimp & Grits also sounded good, but $17 sounded a bit much for something I've had success cooking at home. So, I went with a $13 sandwich, served with fries.

I liked the Amigo's that was here previously much better...

I had a breakfast at Appleton's Hometown Cafe in Lake Mary.

I had the Greek Omelet with hash browns and a biscuit. The omelet was filled with gyro meat (whatever that might consist of), olives, spinach, and feta cheese. I'm sometimes hesitant to order omelets in restaurants based on past disappointments, but this omelet was good. It was really tasty, as was the hash browns and the greasy biscuit. Also, real butter > margarine. I don't see any appeal of eating something called Whipped Spread out of a plastic tub...

One final thought about Appleton's. Don't visit around Christmas. I have no problem with decorating for the holidays. I like doing it myself, but the line was crossed in Appleton's to the point where the decorations became obnoxious. Everything at the table should not have a reddish tint from the reflections of the red mylar on the walls...

When I was invited along with someone who had a coupon for a good deal on all you can eat rock shrimp at Dixie Crossroads, I gladly agreed. We drove to Titusville and were greeted by a giant concrete shrimp. 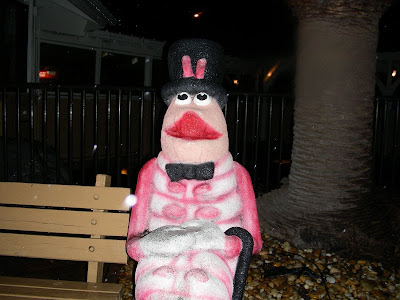 There was a wait, so I passed the time by watching the fish in the restaurant's stocked pond. 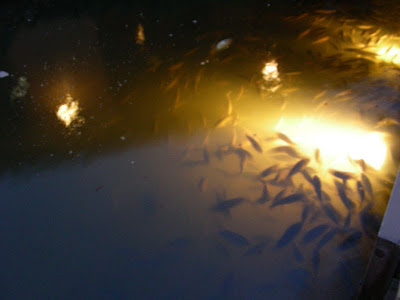 We were seated, and were quickly served these delicious hush puppies covered in powdered sugar. 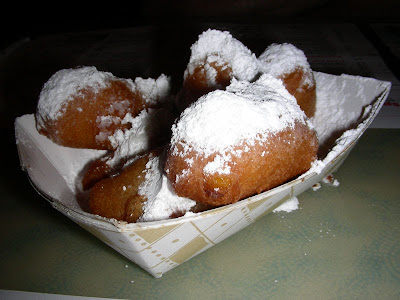 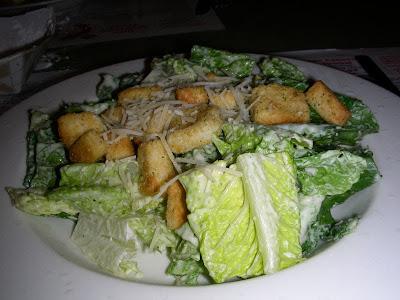 And then it was time for the rock shrimp. The first plate of these butter soaked crustaceans consisted of about three dozen rock shrimp and a side of cheese grits. 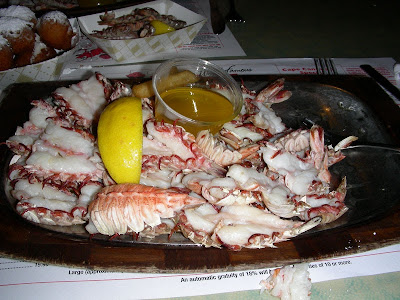 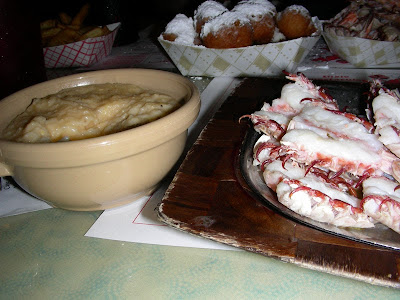 On a normal occasion, three dozen rock shrimp and the various sides would have been plenty to eat. It should have been too much to eat, but since the waitress kept on bringing out more plates of shrimp, we ate more of these delicious cockroaches of the sea. If my calculations are correct, our table went through sixteen dozen shrimp by the end of the meal. The amount of food consumed is kind of disgusting and obscene thinking back to it now.
The shrimp in the back is waving goodbye... 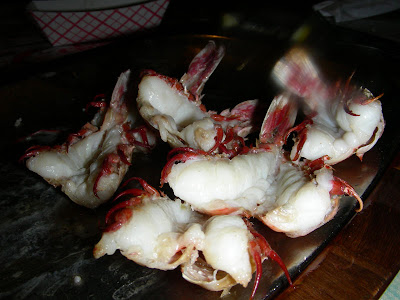 The 2010 Central Florida Fair starts at the end of February, so I thought now would be a good time to finally post some food pictures from last year's 2009 Central Florida Fair. Fair/Carnival food is an interesting concept. Countless mobile food stalls that are constantly traveling around the country all assemble in one place for a week or two. While most people would be hesitant to eat food from the back of a truck in another situation, people have no problem eating like this when in the context of a fair. These food vendors can sometimes have good food, while other times the food is horrible. Some sell traditional fair food such as corn dogs and funnel cakes, while some stands sell more international foods like Greek, Chinese, and Mexican. I even saw a vegan food vendor at the fair, but it didn't look like they were doing much business. It seems the real fun starts when you start deep frying stuff that shouldn't be fried, stuff like candy bars, soda, Twinkies, and butter. Follow the consumption of some of these foods with a ride on the Tilt-A-Whirl, and you're in for a fun time...

I got food from a stand selling Cajun food called Herbert's Grill. I ordered a plate of Jambalaya, which perhaps wasn't the wisest choice from the back of a trailer. I hate to say it, but this was some of the worst Jambalaya I've ever had. The globules of pork fat that coagulated in with the meat really were unappetizing. But then again, I suppose this should have been expected when ordering something at a fair that wasn't deep fried on a stick.

While I was getting my food from Herbert's Grill, someone I was with scored these freshly made potato chips for free from another stand when they were left in the fryer too long and came out extra crispy. Even being well done, these fresh chips were really tasty, much better than my Jambalaya. Stick to the fried food at the fair I suppose...

Of course, being that the Central Florida Fair is one of the good local fairs that actually does the animal stuff besides from carnival rides, you could always buy yourself some fresh lamb chops...

Avalon Park is one of the communities in Central Florida built following the new urbanism model. Much like Celebration or Baldwin Park, Avalon Park features a walkable downtown area, which was void of pedestrians when I visited. The feature that sets Avalon Park's downtown area apart from the other planned communities are the huge cooling towers from the Stanton Power Plant that tower over the treeline. To add to the wonderfulness, if the wind is blowing in the right direction, you can probably get a whiff of the Orange County Landfill that also neighbors the community. Avalon Park has a very Simpsons feel...

I had never been to Avalon Park, so I decided to check the place out and get dinner. I considered giving Brianto's Original Hoagies a try, which seems to be a favorite among some of the other local food blogs, but I wasn't in the mood for a meaty sandwich. Instead, we settled on a place called Papa Gio's to get pizza. 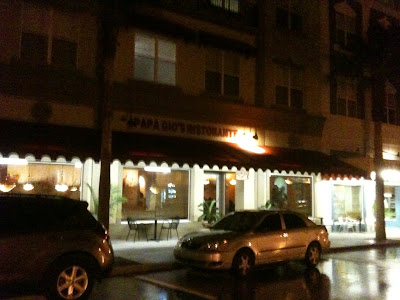 Inside, the dining room walls were painted with both scenes from New York's Little Italy neighborhood and scenes of Italian countrysides. 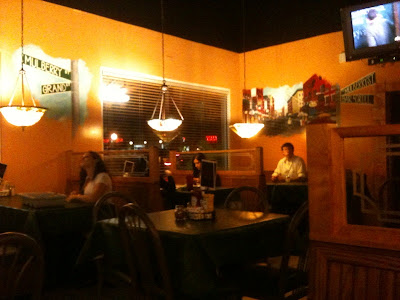 We started with some garlic knots. They were okay, but definitely not the best around. These knots actually had very little garlic on them, which kind of defeated the purpose. 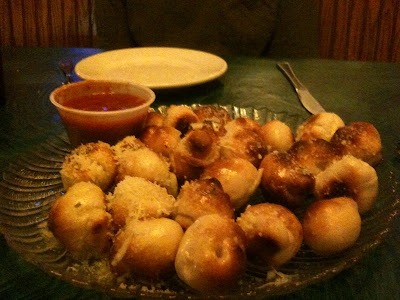 The half spinach/half meatball pizza soon followed the garlic knots. As far as New York style pizza goes in Orlando, this was one of the best pies I've had in a while. The crust was nice and thin. They got the proportions of cheese and sauce perfect, and it all tasted really good. 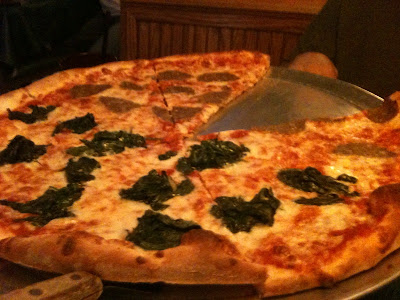 I'm always reluctant to order spinach as a pizza topping because it's hard to know what you're going to get. The worst is when you get chopped frozen spinach on a pizza, which then combines with the cheese while cooking and ends up resembling creamed spinach. Other times, you will get fresh spinach leaves on a pizza, which I like. And yet other times, you get sauteed spinach which can be really good if done right. This is how Papa Gio's made their spinach pizza and they did a good job. It was nice and garlicy, but the only problem was the spinach didn't seem to be drained fully before being put on the pizza. While the meatball side of the pie was nice and crispy, the spinach side was way too soggy in spots where there was too much spinach juice. But really, it was a minor complaint to a really good pizza. 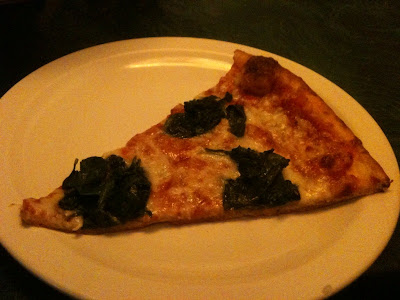 I'd gladly expose myself to the radioactive trace elements from the power plant to get more pizza from Papa Gio's!